There are several ways of trying Tiki CMS/Groupware on a CD which contains everything you need to boot your computer from CD, and let you go directly to using your own installation of Tiki.

The most updated one is "Slax Tiki Live CD" (see below), which can also be converted to an UsbTiki, if desired. There is also KnoppixTiki, even if it is much more outdated. 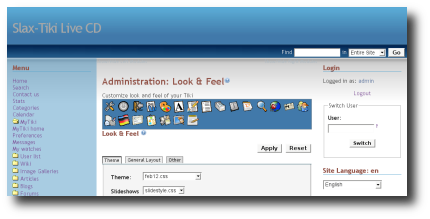 The first one was KnoppixTiki, but until somebody updates it, it's not recommended because it contains an old copy of Tiki (dated from 13. November 2004).