In Tiki you can create/display and use as many polls as you want, to admin polls use the polls link from the admin section in the application menu. 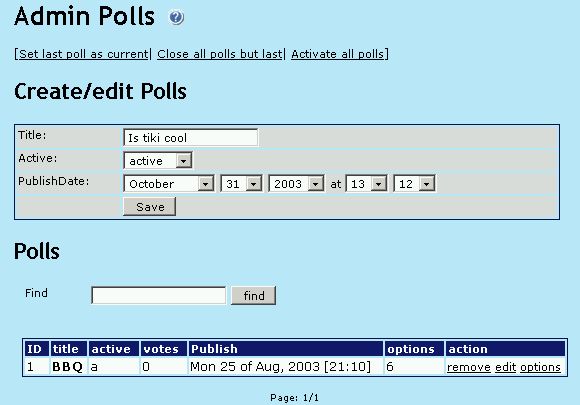 In this screen you can edit/create new polls and remove existing polls, to create a poll you have to indicate the title the type of polls and the publishDate, the type can be:


The publishDate is used to control when the poll will be enabled, you can program polls for the future if you want. A poll can t be viewed/voted/anything until the current date is greater on equal than then poll publishingDate.

Some special links are also provided:

In this screen you will see a preview of the poll, a form to edit/add an option to a poll and the list of options, you can edit options, remove options and add options to a poll as you want.

This will display a random poll from the list of polls with type = current and that have been published.

This can be used to dsiplay any active or current poll indicating the id of the poll to displayed.