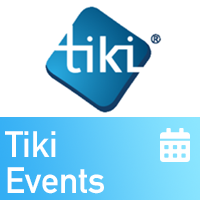 Several Tiki community members will be active participants at the upcoming Make Web Not War 2010 (MWNW), a Canadian cross-platform web conference that takes place May 27, 2010 in Montréal, Canada.

Tiki is a Community Partner of the event and will be featured as one of six web application demos during the Ignite Presentations (http://www.webnotwar.ca/schedule/).

Join us at the conference and meet developers from Tiki (including Tiki Administrator Marc Laporte) and many other projects!

Community work continues towards getting Tiki listed on the Microsoft Web Platform Installer Gallery in order to make Tiki installations and upgrades on a Microsoft server as easy as possible. This is part of the overall Tiki strategy of improving Platform independence.

This video was recorded on May 12, 2010, during the Confoo conference.

Make Web Not War is part of Mondev Open Source Week, which includes several events including Webcom Montreal 2010, where Marc is scheduled to present "A Wiki for your organization: Why and How?"