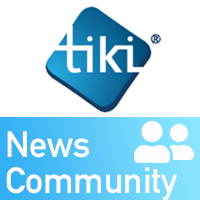 Tiki Wiki CMS Groupware is an organic self-governing project that values doing things "the wiki way" and, in this spirit, when it's time to find people to join the group of project administrators, we draw from the community, looking for members who have been participating actively and are in a position to contribute time and effort to help with the guidance and direction of the project.

At this time, the Admin Group of the Tiki Software Community Association is pleased to announce the addition of four new members: Bilal Siddiq, Brendan Ferguson, Fabio Montefuscolo, and Lindon Barnfield, who have been involved in the project in various ways and can contribute their particular skills and perspectives. The new members expand the range of the admin group in terms of geography, knowledge and experience, and we are very pleased to make this announcement. Thanks again to the new admins for joining as we look forward to a great 2020.

Bilal has been a tech entrepreneur in the software development business since 1999, and has run a Tiki website since 2008. With a BSC (Computer Sciences), he has experience in UX/UI, design and CSS, as well as in communications (journalism, copywriting, SEO, etc.). His background also includes video production (storyboarding, shoot and post-production) and advertising, sales and marketing, with 20 years of experience in marketing digital services and products. Bilal and his wife Amna, who is a software programmer and partner in their work, became more directly involved in the Tiki project via Avan.tech.

Brendan Ferguson started coding HTML/CSS when he was 16, building websites first for himself and then for the community. The love of frontend coding evolved into a love of backend coding, focusing on PHP and MySQL. Early in his education, he focused on programming but also took an interest in other fields of study, like philosophy while attending Brock University. Brendan’s hobbies include photography, the outdoors and fencing. Brendan made his first commit to the Tiki codebase on April 12th, 2014. Since then he has focused his efforts on security and automation within Tiki. Brendan is passionate about open source software and has felt at home in the Tiki community for years. Brendan resides in Niagara Falls, Ontario, Canada.

Fabio is a "Brazilian software developer playing on Tiki" who also became more involved in the project by way of Avan.tech. In that capacity, he has a focus on server uptime, Openfire Tiki interop (ConverseJS) as part of Openfire Meetings development, and is a coach for Avan.tech's TeamDRC, a group of young software developers in Democratic Republic of Congo (http://wikisuite.org/ITOT-Sprint-July-2018, etc.) being sponsored and mentored by Avan.tech. Fabio has experience in PHP, Python, Java, and JavaScript languages; in Django, Codeigniter, and ReactJS frameworks; in Tiki and WordPress, and in ClearOS.

Lindon says: "I found Tiki when I was looking around to set up my first personal website. I picked it out from all the other one-click options the host had because of all its features, and then discovered the other big differentiator - the Tiki community. I am a hobby coder with an unrelated job, so I actually learned to code with the Tiki project - now I know my around pretty well but it takes a special kind of community to be so open and supportive in developing someone like me into an active contributor."

"I work mostly on the PHP, JavaScript and Smarty parts of the code across many of Tiki’s features. I’ve been working on security lately but have also worked on improving the user interface and experience. I like how versatile Tiki is and how the collaborative personality of the Tiki community is reflected in the software itself."

Register at tiki.org and you'll be able to use the account at any *.tiki.org site, thanks to the InterTiki feature. A valid email address is required to receive site notifications and occasional newsletters. You can opt out of these items at any time.